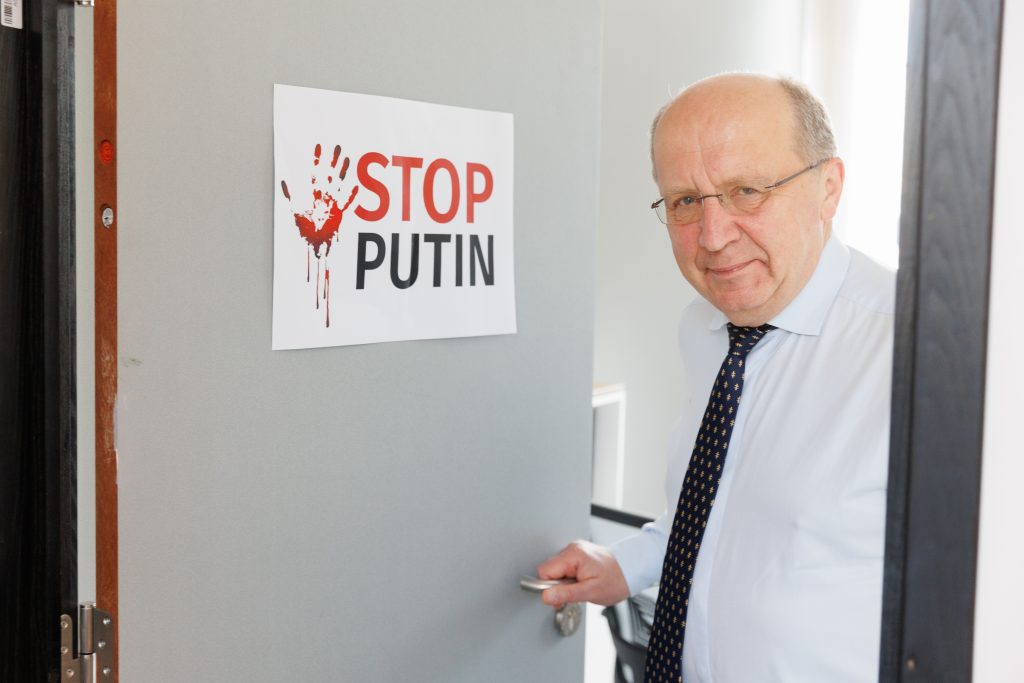 Andrius Kubilius. Ukraine and a Europe tired of being itself

The war has been going on for more than 100 days. And it could go on for hundreds more. It is time to change from sprinting to marathoning. Victory requires not only physical strength but also the right emotional state, long-distance thinking, and even breathing.

And above all, Europe needs this. Not Ukraine, not the United States, not Britain, but the European Union (Europe) needs to get its long-term thinking right and its eyes on victory. In a long marathon. Because Europe is the weak link that Putin is targeting: maybe Europe will falter, maybe it will continue to be more concerned with saving Putin’s face than Europe’s own.

Europe is heterogeneous. There is the Old Europe, which has created a zone of comfort through its work after that war and which sees today’s war not as a security challenge but as an irritant, as an assault on its familiar comfort. For such a Europe, Ukraine is somewhere far away and outside that comfort zone. And there is the New Europe: still unaccustomed to success and comfort, seeing Ukraine as “one of us” and seeing the war as an assault on the existential foundations of its new life built over the last 30 years.

In the near future, Old Europe will inevitably have to wake up from its comfort zone. And together with New Europe, seek answers to the familiar questions posed by this war: who is to blame and what to do? And to agree on answers.

Without an answer to these questions, Europe will return to business as usual, not only in its relations with Putin but in all the other geopolitical failures of the EU in these decades, which led to war. Such business as usual will only mean that the threats to European comfort will only accumulate and grow.

Therefore, Europe must first of all correct its mistake, which has been ongoing for decades: Europe must finally have its own “Ukraine Strategy”. For only in this way can both important questions be properly answered.

We know that Putin has his own “Ukraine Strategy”, which is simply to destroy Ukraine to prevent it from becoming a successful state. The example of Ukraine’s success could inspire ordinary Russians, which would be deadly for the Kremlin regime.

We know that thanks to Putin’s aggressiveness, the Ukrainians have acquired and have their own clear “Ukraine Strategy”: to defend themselves against Russian aggression and, as quickly and as far as possible, to escape geopolitically to the West.

Meanwhile, what is the “Ukrainian Strategy” of the West and, in particular, of Old Europe? This is still not clear either to Old Europe or to Ukraine. When there is no strategy, there are no solutions.

However, it is hoped that a prolonged war will force Europe to finally get its strategy into its own thinking and implement it ambitiously.

This will require Europe to realise its mistakes to date and to set about correcting them strategically. New Europe will have the difficult task of helping Old Europe understand its mistakes and propose how they should be corrected. But, more importantly, it will have to do all this in such a way as to reach an agreement with Old Europe.

What should be a European “Ukraine strategy”?

The answer could be very short: Ukraine must be a full member of the European Union in 2030. And fully rebuilt after the war.

Some may start explaining, like the Dutch prime minister, that the process of Ukraine’s accession to the European Union will take much longer, perhaps even several decades. But this will only show that anyone who talks like this has still not grasped the mistakes Europe has made so far and still has no “Ukraine strategy”.

Why is Ukraine’s membership of the European Union and the rapid reconstruction of Ukraine important for Europe itself?

And this is the first fundamental mistake of the European Union, which it must correct immediately. Democratic Europe must regain its hunger for expansion, for the expansion of the democratic space, because this is the only possibility of preserving and expanding the space of European prosperity.

Otherwise, on its fringes, a space of oriental decadence, chaos and authoritarianism, which is degenerating into fascism, will only expand, and this will be an ever-greater threat to Europe itself.

It is, therefore, high time for the European Union to change its philosophical approach to the neighbourhood and to enlargement because this is the main cause of Europe’s geopolitical mistakes to date: until now, in Old Europe, it has been assumed that countries such as Ukraine, Moldova, or the Western Balkans are some kind of foreign beggars asking to be admitted to the club of the rich, but that the club itself is unwilling to admit such beggars, and it has invented a hundred criteria and excuses to justify itself publicly in order to justify this. That is why Old Europe is arguing about whether such countries deserve to be called candidates. And if they do, they then look for any reason to indefinitely delay the so-called accession negotiations. This is the philosophy of “geopolitical laziness”, which has been cultivated by Old Europe over the last decades that, and ultimately led to war.

When Europe and Ukraine start to look at how to simply “reunify” and not just integrate, apply for candidacy, etc., then all the processes of Ukraine becoming a member of the European Union will make the right geopolitical sense. Then the real European “Ukraine strategy” will be born – a strategy for realising such reunification.

But for such a European “Ukraine strategy” to become a reality, we need to talk not only about the need to change the development philosophy. In the last few decades, Europe, committed to the philosophy of “geopolitical laziness”, has developed a whole series of pseudo-arguments to justify its laziness and the supposed loss of its “appetite for development”. Some of these arguments are made in public, some are not, but still influence the political decisions of old Europe. Even after the war. These arguments deserve to be named and also to be refuted in an argumentative way because only this will allow Europe to return from “laziness” to a philosophy of “geopolitical courage and development”.

In what follows, I will try to list some of the arguments that have become part of the Old European lexicon and have become clichés as to why Ukraine cannot become a member of the European Union within the next decade. Such clichés have to be destroyed by their own arguments by showing that they are completely unfounded

– Ukraine’s membership in the European Union, and its reconstruction, will cost European taxpayers dearly. On the other hand, the enlargement of the European Union has brought many economic benefits to Old Europe. The reconstruction of Ukraine will create many new jobs, not only in Ukraine but also in Europe itself. Ukraine is a resource-rich country, and becoming part of the common European economy will enrich Europe rather than impoverish it.

– Ukraine is not in line with the European value system: corruption is rampant, and the rule of law is broken. No one disputes that Ukraine has major problems to overcome. However, transparency in governance and a functioning legal system are not the only European values on which Europe rests. In these difficult days, we can clearly see that Ukraine, with its European values of solidarity, leadership, honesty, and decency, is closer to the classical European virtues than many other European countries or their leaders. It is possible that in Europe, in addition to the “Copenhagen Criteria” of values, which are applied to those countries that wish to become members of the European Union, we will have to introduce a new “Kyiv Criteria”, which would define the European virtues of political leadership, honesty, decency, solidarity, and by which the citizens of Old Europe could judge the performance of their political leaders.

– The institutions of the European Union are not ready for enlargement. It is clear that Europe is still facing major governance problems. Consensus-based decision-making was not a problem when it came to an agreement among ten or a dozen EU members. When the number of members reaches several dozen and may approach 40 with the new wave of enlargement, such a decision-making mechanism will become completely inadequate. The further we go, the more Hungaries and blackmailers will appear in Europe. Therefore, there can only be one answer to this argument of the opponents of enlargement: let us change institutions and decision-making, but let us not stop enlargement. Peace on the European continent, which can only be guaranteed by further enlargement, is more important than the inability or unwillingness to change any rules.

– European voters are “tired of enlargement” – to the contrary, recent polls show that, in the wake of the war, a majority of European voters support Ukraine’s membership of the European Union. Only the political leaders of individual countries are unwilling/fearful. The leaders do not dare to openly state their arguments as to why they are afraid of it, so one has to guess that there are no serious arguments. There is only a psychological fear that Ukraine’s membership in the EU will create serious competition for the leadership of Old Europe in the EU. And to the political comfort and geopolitical laziness of Old Europe.

These are the arguments of a Europe that are tired of being itself and why it no longer wants to expand. Moreover, they are easily refutable arguments. Between the 1990s and the 2000s, Europe was not afraid to expand. And it was not tired of being itself: of expanding the space of democracy and prosperity to the point where it became the continent of Europe because only this can guarantee lasting peace on the European continent.

After the 2000s, Europe became tired of being itself. It got lazy. Or it got scared of Putin’s Russia and shrank away.

That is what led to today’s war.

Europe’s lazy days are over. The time for lazy comfort is over. Europe will not be able to get out of the geopolitical crisis by Ukraine’s efforts alone. It will have to change its own philosophy. Enlargement is the right response to the challenges of this crisis. Only in this way can Europe become itself again.