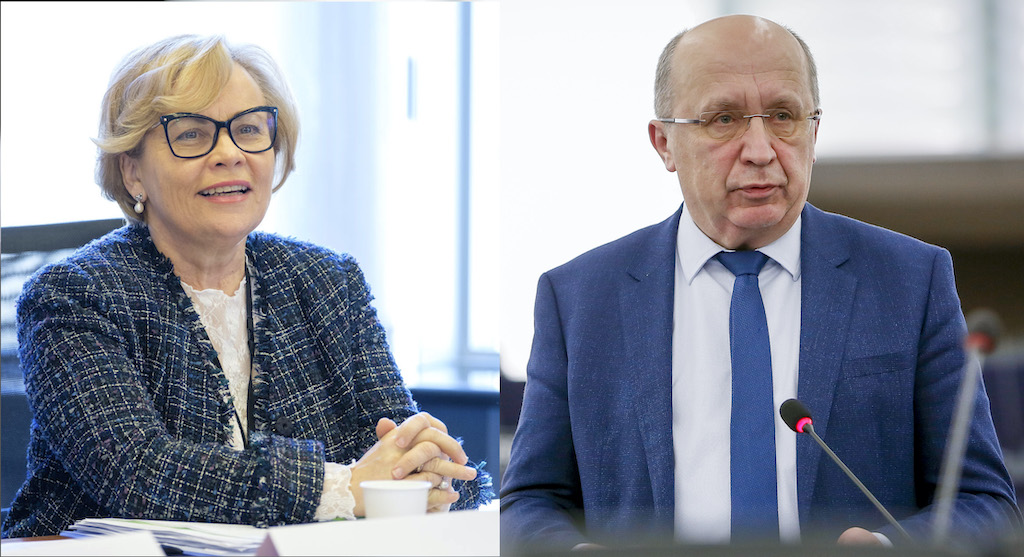 Anniversary of the end of WWII: is the Ukrainian sacrifice forgotten?

Victory against fascism in 1945 was of global importance. However, it is the fact that for millions of people in Central and Eastern Europe on that day the Hitler’s occupation was replaced by the Stalin’s occupation. In reality, for us in Lithuania, the Second World War ended only in 1990, when we regained independence.

Commemoration of the End of the Second World War is important because not only it is the day, when we are paying tribute to all the victims and we repeat “Never again”. It is also the day, when we are able to witness how still deeply Europe is divided: on the one side, there is the part of democracy and freedom, which respects history and truth, while on the other side – the part of authoritarianism, which strives to appropriate and manipulate the history for neo-fascist, neo-imperial goals.

Nobody will deny that the Soviet Union paid a huge human price during the Second World War, despite the fact that the war started after Stalin and Hitler reached the notorious agreement of 23 August 1939, so called Molotov-Ribbentrop Pact and its Secret Protocols. All the victims must be honoured and remembered.

Today, 75 years after the Second World War ended, Europe is different, there is no more the Soviet Union, but its aggressive legacy remains: 6 years ago, Vladimir Putin has started war against Ukraine, which is still ongoing.

On 9 May, Vladimir Putin will proudly speak about the victory in the Second World War  and he will speak in the same way as it was done during the soviet time – about the victory of the soviet people. Nevertheless, we have to remember, that this is the victory, for which not only Russians, but also Ukrainians and Belorussians have paid a huge price.

Let us look into history of the Second World War from the Ukrainian point of view.

Ukraine found itself in the very epicentre of the Second World War, with the front rolling over its territory twice – in 1941 during the Red Army retreat and in 1943-1944 during its offensive. It brought about unprecedented number of victims and devastation. 8 million Ukrainians have lost their lives, 714 towns and 28 thousand villages were completely or partially destroyed, half out of 7 million Ukrainians who served in the Red Army have perished. Hence, when we hear the official Russian historical account that during the Second World War the Soviet Union lost in combat more than 8.6 million soldiers, we have to remember that around 3.5 million of them were Ukrainians.

In the Kremlin’s narrative, the major contribution to the victory over the fascism ignores the sacrifice of other nations, then under the soviet control. Their contribution is ascribed automatically to Russia. By “privatising” the victory narrative, Vladimir Putin builds on the legacy of the soviet propaganda strategy to ignore the role of other peoples of the Soviet Union, first of all, of Ukrainians. This way, the Kremlin portrays Russia as the sole owner of the victory over fascism.

For example, in April 2020 Putin, acted on behalf of Russia as the heir to the glory of the meeting on the Elbe, although in 1945 the Americans met on the Elbe with fighters of the First Ukrainian Front, majority of which were Ukrainians.

The Kremlin strives to monopolise victory narrative to portray itself as today’s “moral” leader of anti-fascism in the Worlds eyes. In this narrative, anyone who acts against the will or interests of the Kremlin becomes a fascist himself.

However, behind this strategy lie very concrete political goals of the Kremlin – to receive indulgency for soviet and current crimes, to mask with an anti-fascist rhetoric its neo-imperial aggression against Ukraine and hybrid war against democracies, and in this way to pressure the Western countries, former allies in the anti-fascist coalition, who now have imposed sanctions against Russia in relation to its aggression against the neighbour. Because those who are criticizing Russia are blamed by the Kremlin as betrayers of “anti-fascist” ideals.

What should be our response to these persistent attempts to manipulate the history and to use “anti-fascist” rhetoric as a smokescreen to cover Kremlin’s neo-fascist and neo-imperial aggressive policy?

The best way is to make a clear separation: to pay tribute to the victims, but not to participate in manipulations. There is no necessity to go to Moscow, to honour the victims of the Second World War. Participation in that manipulation of the Kremlin would in fact be a betrayal of all the victims, because they perished in the fight against the regime, which has used very similar manipulations.

Those who sincerely wish to pay tribute to the victims of the Second World War should instead go to Kiev, to honour the Ukrainian nation sacrifices. Ukraine has paid a huge human price for the victory in the Second World War. Ukraine has paid a huge price being victim of Stalin’s Holodomor.  Ukraine is still paying a huge price in its continued struggle for sovereignty and the right not to be separated from Europe by the dividing line drawn by Stalin and Hitler on 23 August 1939 and then again reconfirmed by the victorious Allies in Yalta.