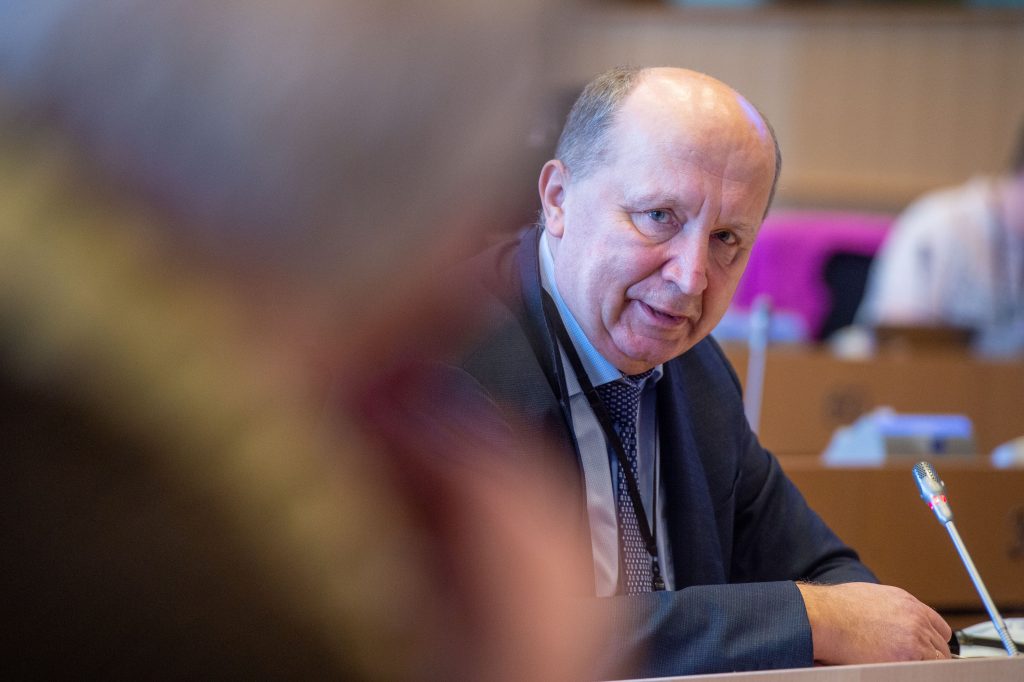 ‘Elections’ in Russia – what does Putin fear most?

From September 17-19, the Russian Duma ‘elections’ will be held. The term ‘elections’ are placed in quotation marks because, of course, there will be no elections of the sort we in Lithuania and across the West are used to. Putin is a good student of Lukashenko – the latter ‘stole’ the elections already after they were held, and it turned out that Lukashenko lost to Tsikhanouskaya.

Putin is ‘stealing’ the election results ahead of time. So opposition candidates who could run in the Duma elections have either been imprisoned like Navalny and many of his comrades, or were simply refused registration, being described as ‘foreign agents’ or ‘extremists.’ Opposition news media and civil organisations are also persecuted, with the Kremlin exerting vast efforts to create an atmosphere of fear and government brutality in Russia. Pre-emptively signalling that the government will not tolerate any post-election protests.

It is clear that after last year’s elections in Belarus, Putin is rather frightened of something of a similar nature occurring in Russia as well. And so, the Kremlin is insuring and reinsuring itself as candidate lists in single-mandate electoral districts have been stripped of any potential competition, with even some communist candidates being refused registration. Voting will be held over three days so that no observers can control the fairness of the voting, while Navalny’s ‘wise voting’ initiative is fought to the point that courts even banned the two words from being used over the internet. With elections being held under such conditions of persecution, they cannot be recognised as legitimate by the international community, and so they are less critical in terms of the final ‘results’ that the Kremlin is now painting, and more in terms of what long term processes we will see sparked by these elections.

We can guess that Putin is interested less in the Duma’s composition and more in having the sort of majority the Kremlin needs alongside the typically loyal Zyuganov Communists and Zhirinovskyists. Putin is likely far more interested in what signal these elections will send the Russian elites and common citizens, as well as the world at large, prior to the looming Russian presidential elections in 2024, and it could be that already these Duma elections will send a sufficiently convincing signal to Putin himself that it’s no longer worth for him to run for office in 2024. It is also worth dedicating a little more attention to the indications and phenomena that would show already in these Duma elections that change is inevitable in Russia.

How do we evaluate view the Duma election results?

It is already clear that Putin is prepared to declare the victory of his United Russia party in the Duma elections, and massive efforts are being exerted to this end so that the party’s candidates do not face stiff competition. It is worth remembering that since 2016, the Russian Duma, which has 450 members, has been elected based on a mixed electoral system, which is like Lithuania’s. Half of the Duma’s 225 members is elected based on party lists, and the other half are in single-mandate electoral districts.

It is in single-mandate districts that Putin expects his greatest wins – some sociologists have calculated that based on current circumstances where the competition is eliminated, Putin’s candidates could win 180 single-mandate districts, which is 80% of the seats in this bracket. However, voting for party lists could prove far more painful to Putin, and this is where particular attention is due as based on current publicly released surveys, Putin’s United Russia has only 30 per cent support in surveys. This is reported by sociological campaigns that are intimidated by the Kremlin, and one could guess that, the support could be even lower, not even reaching 30 per cent. Putin’s United Russia party, one which has all the Kremlin’s resources in hand, would see obtaining 30 per cent of the vote in these elections as being a painful loss. It is necessary to remember that this party took 55 per cent of the vote in the 2016 Duma elections, 59.2 per cent in 2011, and 64.3 per cent in 2007. So let us be ready to objectively evaluate even the results of these elections, which Putin has already ‘stolen’ – even if the Kremlin were to trumpet that Putin won the Duma elections and that he has a majority, we should be most interested in the results of party-list voting, which are far more challenging to fabricate. If Putin’s party only wins 30 per cent of the vote, it will be a signal that Putin suffered a significant loss in these Duma elections.

What else does Putin fear?

It is evident that Putin is fearful of the coming Duma elections, and even these elections may be an unambiguous sign to him that the real, rather than falsified, support for the Kremlin’s policies is quite low not even reaching a third of voters and plummeting at a catastrophic pace. Two key factors will eventually play an increasingly important role and make both the Kremlin and Russian elites increasingly comprehend the necessity of inevitable change. Such changes are something that Putin’s kleptocratic regime seeks to avoid at all costs because its primary goal is to retain the wealth it has appropriated; however, there are changes which even the Kremlin cannot halt. The first of the two factors is the perspective of the new, younger generation. There is little need for explanation, you only need to take a look at the sociological study results released by the Levada Centre this year, which you can find here. Based on this study, we can see a clear trend that voters under 40 will not vote for Putin in the presidential elections. Once again, we should remember that the Levada Centre is one of the few whose existence the Kremlin still permits, but even its results indicate clear trends – the Russian public is becoming tired of Putin. The younger generation no longer associates Putin with their hopes for a better life, which happened to Lukashenko. Putin understands and fears this – the youth are on Navalny’s side, and so Putin can only pander to them and kindly agree with a student who dares correct the mistakes of Putin, the historian. But generations change, and Putin cannot halt this. This is what frightens him. The second factor, which Putin is afraid of is the European Union’s Green Deal. Without going into details (that I have written on previously), it is worth noting that the EU’s commitment to implementing the Green Deal will have massive geopolitical repercussions for Russia first and foremost over the coming 15-20 years. If the Green Deal is implemented as planned after 2035, gas imports from Russia to the EU will fall by around 70 per cent, and all Russian state finances are currently based on revenue from gas and oil sales to Europe. Implementing the Green Deal in the European Union will mean that Russia will inevitably have to transform its entire economic structure, which will eventually lead to fundamental changes in Russia’s internal political architecture. Where such changes will lead for Russia is hard to predict, but we already perceive that across the European continent’s Eastern side, we see the same historical trend – the democratic and Western European way of life is gradually gaining more ground in the East. It all started with the Baltic States, then with Georgia, Ukraine and Moldova following. Belarus is now beginning to move in the same direction, and there are no reasons that suggest that Russia won’t do the same. We will observe the first two indicators at the Duma ‘elections’ in two weeks, and then come to the inevitable two factors – a new and younger generation of Russian citizens and the European Green Deal.

These are what Putin fears the most.