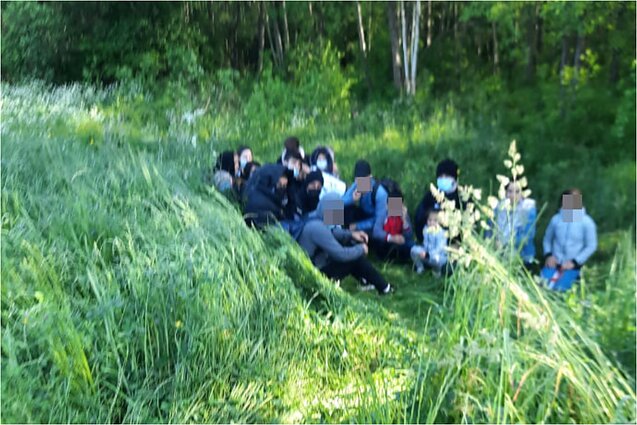 During a recent sitting at the European Parliament Committee on Foreign Affairs and Committee on Civil Liberties, Justice and Home Affairs, there was a lengthy discussion of the situation regarding the transportation of illegal migrants from Belarus across the Lithuanian border.

Participating European Commissioner Ylva Johansson from Sweden said that the arrival of migrants crossing the border from Belarus to Lithuania illegally has increased by a factor of 22, with the situation worsening by the week. Most of the migrants are from Iraq, Congo and Cameroon. “The EU imposed sanctions on Belarus and expanded them, and the Lukashenko regime responded. It appears that the Belarusian government is aiding the illegal migrants and that this is a response to Lithuania’s actions in defending Belarusian civil society,” the European Commissioner said.

Based on available information, it can be noted that the migrants are arriving from Istanbul and Baghdad to Minsk via commercial flight, with the Belarusians organising several flights a day and then transporting the migrants to the Belarusian-Lithuanian border, where they continue to cross it in unmonitored location. They then request asylum. “This is a difficult situation, and so it is important for us to show solidarity with Lithuania,” said European commissioner Y. Johansson.

According to Johansson, the European Commission is prepared to offer financial support, and in order to assist with resolving the illegal migrant crisis, 10 million euros are to be allocated from various programmes. Furthermore, there are to be discussions held on suspending the visa regime with Belarus, with Johansson stating that migrants should not become a political tool and that Lithuania must receive the EU’s support. Lithuanian Minister of Interior Affairs Agnė Bilotaitėsaid that this influx of illegal migrants is a hybrid attack against Lithuania, and indeed all of the European Union.

“Illegal migration is exploited as a weapon, and its scale has increased dramatically,” she said, as she believes that this is happening due to Lithuania’s active support to Belarusian civil society, adding “It’s a war against the entire EU and Western democracies.” The minister introduced the situation in-depth at the Lithuanian-Belarusian border and presented documentary evidence on how the Belarusian regime is assisting the migrants in reaching Belarus. Most of the arriving migrants come without documents and with one-way tickets, but a tourism agency with ties to the Belarusian regime’s administration issues them visas at Minsk Airport. Furthermore, traces of border crossing and such are concealed. According to the minister, Belarus’ border guards do not cooperate with Lithuanian institutions and do not perform any investigations of illegal crossings across the Belarusian-Lithuanian border.

She also introduced the measures that Lithuania has employed in seeking to contain the situation on the EU’s border. Member of the European Parliament Rasa Juknevičienė, who initiated the discussions on this issue, noted that this is no simple case of migration but a hybrid attack supported by the Kremlin and perpetrated by Lukashenko against not only Lithuania but all of the European Union. “People are thrown across the border like bombs in an effort to assault a neighbouring country’s sovereignty. In Lithuania, we link this attack to not only the Lukashenko regime’s revenge for our support to democratic forces but also to the looming Russian-Belarusian military exercises Zapad 2021,” said the MEP. According to Juknevičienė, their scenario had numerous hybrid warfare elements during similar exercises two years ago.

“There is a high likelihood that this year, numerous non-conventional measures will be employed. This also includes artificially inflated migrant flows, live disinformation in EU languages, and various proxy structures within countries,” she said. Also, the MEP pointed out, migrants, that is to say, human beings from distant countries, are being exploited as a tool. “You have to be blunt about this. Lukashenko’s team is working alongside the Kremlin in creating transportation chains for illegal migrants. They are as if a component part of the military complex and can be promptly leveraged for attacks against neighbouring countries, and information has surfaced that there is also close cooperation with Iranian special services,” the MEP pointed out.

She emphasised that the EU must inspect the situation in-depth, particularly with regards to security and defence. “If analysis and prompt solutions are not employed, far larger attacks could occur in the future against any EU country. If we are talking about strategic security autonomy, this is precisely where the EU should be able to predict threats and have the capacity to defend itself,” said Juknevičienė. According to the MEP, if Lithuania fails, it will be a sign to Lukashenko-type dictators that they can use this sort of weapon at an even wider scope, and at a larger scale. The session included the director of the European Border and Coast Guard Agency FRONTEX Fabrice Leggeri, who introduced which measures the agency has turned to in response to this crisis, as well as European External Action Service representative Luc Devigne, with statements also from other MEPs.