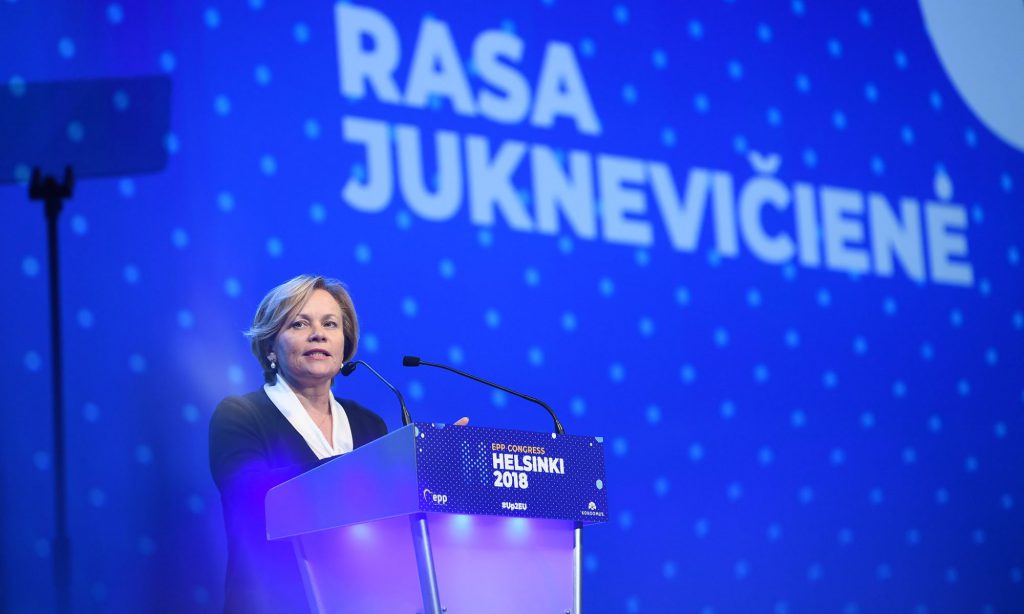 Rasa Juknevičienė: what does Putin‘s aspiration to return ‘the sun of Stalin’ into Russian politics mean?

Having reappeared from self-isolation spent in one of his bunkers, Vladimir Putin has once again returned to World War II affairs after last December focussing on history, re-introducing Stalinist arguments and rhetoric into the Russian narrative about the war.

At the end of June, the Moscow military parade took place despite the pandemic. Putin‘s article in the US media (controlled by people close to the Kremlin), along with his statement regarding soviet republics left the Soviet Union with gifts, that is, territories that the Soviet Union supposedly gave away, has reminded the public about Putin‘s role as a historian and his imperial ambitions.

Many are wondering if this is only a spectacle dedicated to Russia‘s internal politics, or if Putin has a more serious plan for the final stage of his political life. Whom was Putin referring to when he spoke of territorial gifts – Kazakhstan, Ukraine, Belarus, the Baltic states? The widely advertised statement about territorial claims is forcing observers to think hard about this. The Stalinist interpretations of history make a comeback in the president’s article titled ‘The Real Lessons of the 75th Anniversary of World War II’, but it is not accurate to claim that this amounts to the rewriting the history, as Putin is not rewriting the history of World War II. Rather, he brings back the soviet interpretation of it. It was present up until 1989 when USSR congress of deputies acknowledged and condemned Ribbentrop-Molotov secret protocols, followed by the by the 1991 the signing of an agreement between Boris Yeltsin and Vytautas Landsbergis, acknowledging the annexation that took place in 1940 – an agreement that is still in force. There is also a paragraph in Putin’s article mentioning that Baltic states voluntarily incorporated themselves into USSR, and lived happily ever after while also nurturing their language and traditions also as part of the USSR. Such an official text by the President of the Russian Federation about the Baltic states saw the light of day of for the first since the collapse of the USSR:
”In the autumn of 1939, the Soviet Union, while pursuing its strategic and defence objectives, started incorporating Latvia, Lithuania and Estonia. Their accession to the USSR was implemented on an agreement basis and with the support of the elected governments, and the process took place based on international and domestic law. In addition, in October of 1939, the city of Vilnius and the surrounding territory, which was previously part of Poland, were returned to Lithuania. The Baltic states, while part of the USSR, retained their national institutions, language, and were represented in the Soviet Union‘s upper state structures.“ writes Putin.

A proposal was presented parallel to Russia‘s parliament (Duma) to acknowledge the 1989 December 24th Soviet Union‘s Council of People deputy council decision as invalid. The decision condemns the signing of the 1939 Soviet and German non-aggression pact, the Molotov-Ribbentrop pact. The main force of the Kremlin‘s propaganda apparatus is again energetically mentioning ’Pribaltika’ (the Baltic states) in the same fashion as Ukraine. Watching this on the sidelines, there are genuine questions about whether this is actually a narrative merely for the purpose of mobilising the Russian people ahead of the referendum on the amendment to the Constitution, or whether there is something deeper going on. I cannot discount the possibility that the plan is broader than that, considering that after his speech in 2007 in Munich, he marched into Ukraine and other places. Putin has his political life plan. It is possible that the plan, if it has its beginnings somewhere in Belarus or Kazakhstan, may give completely opposite results than expected, which happened in Ukraine when Putin‘s aggression pushed Ukrainians towards Europe.

Yes, Putin’s main goal is to retain the current aggressiveness of the regime at any cost. That is what the new constitution, together with the charade involving supposed voting, is meant for. However, we will also shortly see what the elevation of Stalin‘s politics and signals about the alleged ‘gifted territories’ means. The longing for the USSR did not appear recently. The first step was the return of the USSR hymn when V.Putin won the almost democratic elections in the year 2000. That was already a sign. This was followed by the destruction of the democratic process within the country and the famous speech in Munich, where the entire world was told that the USSR collapse was the ‘biggest tragedy of the 20th century’. There his plan was openly voiced, stating the Putin’s Russian will not follow either Western nor European path. The speech was aggressive. However, not everyone understood it. This was followed by aggression against Sakartvelo (Georgia). Still, this was not taken seriously. Then came the time for war against Ukraine. If we look at the wider map, instead of the old USSR one, we can clearly see the resurgence of priorities of the USSR period in the current Russian politics – Syria, Venezuela, energy and political war in the African states, and activities in Libya. This is why I cannot discount the current rhetoric as being just for the purpose of reigniting the trust in Putin solely inside the country.

By assessing Russian propaganda, we can see that there is an expectation that the US will become weaker. Tensions on both sides of the Atlantic are giving the Kremlin hope that in the near future, hands will be freer to tie down the lost USSR territories. When working in the government between 2008 and 2012 and leading the Ministry of National Defence, I had the opportunity to look in-depth into intelligence data and talk directly with our allies. Right after the activities against Georgia, the Kremlin started rapidly modernising its forces close to our borders. At that time, in cooperation with various high-ranking officers from the US, we considered both sides of the argument that Putin will seek to expand his territories. Maidan hadn’t happened at that point, Crimea was not annexed, and many in the West were still asleep and hopeful that a friendly relationship with Putin would ensue. However, Ukraine changed the Kremlin’s plans. Everything was different. Viktor Yanukovych was supposed to guarantee the merging of Ukraine with Russia, the West was supposed to keep sleeping, and the new NATO members were supposed to remain members only on paper. After an adventure gone awry in East Ukraine, Putin is attempting to return to the same dreams about the once-glorious USSR. It is already clear that the imperial calculations are faulty, and the result will be a failure. The only question is how many disasters will Putin‘s dreams bring about, and whether there will be anyone with some semblance of a mind in the Kremlin to stop these possibly bloody contemporary dreams of a so-called Russian emperor?