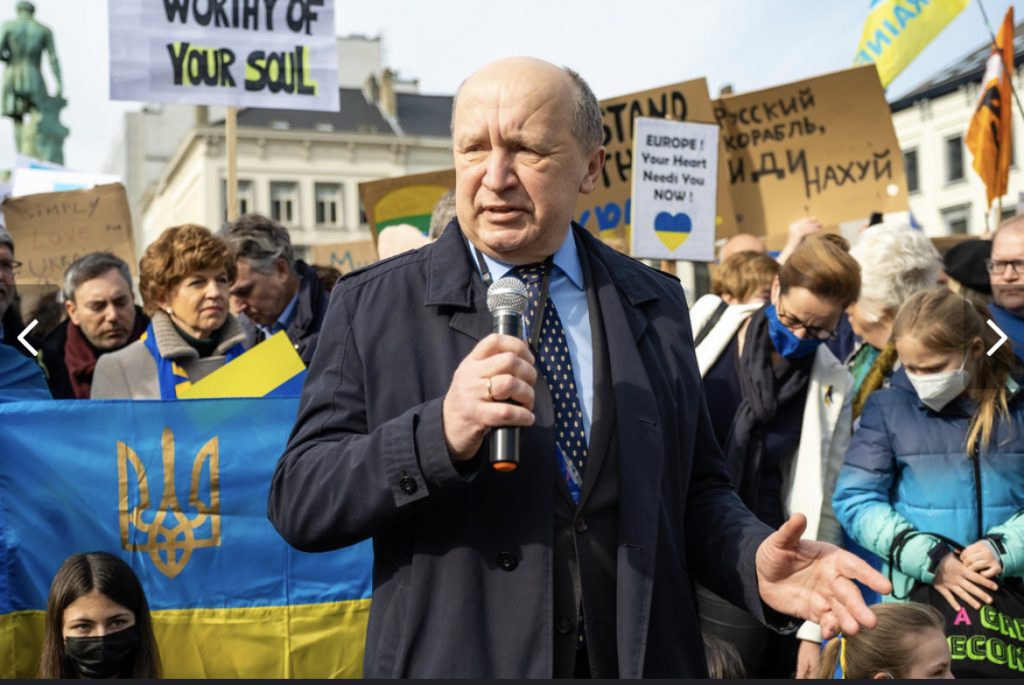 The purpose of our war

I keep saying that this is our war, not just Ukraine’s. It is the war of the entire democratic Western world against the restoration of the Evil Empire.

If it is the war of the whole West, if it is Our war, then not only the Ukrainians but the whole West must have a clear objective for this war.

Many can say very simply: the main objective of all of us is to bring the war to an end as quickly as possible. That is important. But it is equally important to ensure that there are no more such wars on the European continent. If we do not set this objective for ourselves, then, even if we achieve the immediate cessation of the war, a high probability that such a war will happen again after a while still remains. A strong possibility that the Kremlin will once again rush into Ukraine with a fully recovered army will still remain.

Therefore, our main objective, as well as that of the West, in the war started by Putin, must be very clear: to make sure that the Kremlin and Russia are no longer able and are no longer willing to wage such wars for centuries to come in Ukraine and in the whole Europe.

There is only one way to achieve this, and that is if Russia finally transforms itself into a European-style democracy. Then, only a democratic Russia will no longer be a threat to Ukraine or the entire European continent. Today, any other option (replacing Putin with another Russian dictator) can only temporarily stave off these threats.

It is understandable that “democracy in Russia” for many Westerners today seems like a distant and impossible fantasy. Many will immediately start quoting various opinion polls taken in Russia these days, showing that the majority of Russians support Putin and his war against Ukraine.

However, the results of such opinion polls should not be surprising. It is not even worth talking much about the role of Kremlin propaganda and the ‘zombification’ of the consciousness of ordinary Russians. However, the current success of this ‘zombification’ in Russia does not indicate the continued inability of the Russian people to live under a democracy.

It is worth remembering that before World War II, in Nazi Germany and imperialist Japan, the majority of Germans and Japanese also supported Hitler’s plans to expand eastwards and rejoiced at the occupation of Paris. They also supported Japan’s imperial expansion in the Pacific and in China, and they rejoiced at the success of the Japanese army at Pearl Harbour.

However, both ordinary Germans and Japanese are happy that their countries are strong and stable democracies. And they are not complaining that the democratic world after World War II forced and helped them become democracies because that was the only way to ensure that no one would be tempted to recreate Nazi Germany or imperial Japan, once again threatening the whole world with aggressive wars.

That is why today’s West must also realise that the only path to security and stability on the European continent is democracy in Russia. Any dialogue with Putin or with his appointed successor, who will be an equally, if not more, brutal dictator, will not increase security on the European continent. On the contrary, such dialogues only encourage the dictator to be more insanely aggressive.

The only way toward democracy in Russia after this war is Putin’s complete and total defeat (and Russia he leads) in this war. The same way as such wars were once lost by Nazi Germany or imperial Japan.

This requires not only that the Ukrainians, with the help of the West, crush the Russian army on the battlefield so that it has no choice but to flee the territories occupied by Ukraine (or negotiate the peaceful withdrawal of the entire army in peace talks), but also that Russia gets a taste of its economy completely crushed by Western sanctions.

We in the West must urgently understand what is needed to achieve such a victory in Our war:

First, it needs to be understood uniformly throughout the West already today that this is OUR war, not just Ukraine’s war for its own country. Only such an understanding will make us (not only Lithuania but also the whole West) mobilise all our resources for such a war. We have only voluntarily assisted and supported Ukraine’s efforts to defend itself until now. Volunteering and charity are no longer sufficient – at a recent meeting of the U4U (United for Ukraine) Ukraine Support Network that we had initiated, we heard from Ukrainians that they need to receive 15,000 tonnes of humanitarian food aid every day while they are receiving only 5,000 tonnes delivered by volunteer organisations and donate voluntarily by countries from their stocks. That is certainly not sufficient. An EU-wide mobilisation system is needed (not just for humanitarian aid), but such a system does not exist yet because there is still no understanding that this is Our War.

– Our war requires our victory, with Ukraine playing a pivotal role. In order to achieve victory on the front lines of the war, Ukraine needs Western military support to ensure that it not only defends itself but is also able to defeat the Russian army and to be able to dislodge it from the occupied territories. To do this, Ukraine needs not only defensive but also offensive weapons. Suppose this is really Our war, and we are aiming for victory. In that case, the West should not hesitate to provide Ukraine with such weapons directly from its own warehouses or create lend-lease financing instruments similar to those used by the Americans in the last war. Such financing instruments would now be used to enable the Ukrainians to purchase directly from the Western military industry the weapons they need.

In Our war, one of our most important weapons for our victory is our sanctions: Western sanctions on the Russian economy. Maximum and immediate sanctions: a complete embargo on imports of energy resources, SWIFT sanctions on all Russian banks, the closure of all EU ports to Russian cargo. Russia must realise that this kind of sanctions will really smash its economy. Prominent economic experts calculate that an immediate embargo on oil and gas imports alone would crush the Russian economy, which would shrink by 30-40% a year, while the EU itself would feel little pain, as the Western economies would only handle a maximum negative impact of 2-3%.

– Russia must acknowledge that such crushing sanctions will remain in place until the last occupier leaves the Ukrainian territory. The more soldiers they sacrifice now and the more Ukrainian civilians they kill in order to try to occupy one more Ukrainian town, the more they have to realise that they will have to pay an excruciating price, whether in the form of the enlarged cemeteries of Russian troops in Russia itself, the empty refrigerators today and tomorrow, or in the International Tribunals of tomorrow and the day after.

– Russia must acknowledge today that after a lost war, it will be faced with other medicines known from the history: reparations for the reconstruction of Ukraine; international tribunals for aggression and war crimes, not only for Putin and Lukashenko and their inner circle, whether it is Shoigu or Lavrov but also for the officer who ordered the firing of rockets at a maternity hospital in Mariupol or for the sergeant who aimed and fired a rocket at the administration building of the district of Mykolayiv.

– A deputinized Russia will also be faced with what, after the last war, was called the Marshall Plan and was targeted toward de-Nazified, democracy-consolidating West Germany, led by Adenauer. It is worth remembering that the main objective of the American Marshall Plan in the post-war years was not only to help rebuild the economy of Western Europe, which had been destroyed during the war but also to help strengthen and consolidate the post-war democracy of Europe, which was threatened by the local Communists, supported by Stalin, from the left, as well as by the nostalgia for the Nazi ‘glory’ from the right. Now the West, and the European Union, in particular, will have to worry about how to help those who will seek to return Russia to the path of democratic development after a lost war. This will not be easy, but it is something that the West needs to be talking about today when communicating with potential leaders of future Democratic Russia because this war is the only chance for Russia to become different. The West must do everything in its power to make this possibility a reality.

Therefore in OUR war, we must build on our clear common philosophy and clear goals. Only this approach will allow us to mobilise all our joint efforts:

– Lasting peace and security in Europe is only possible if Russia becomes a stable democracy;

– For this to happen, today’s Russian dictator Putin must painfully lose the war he launched against Ukraine;

– For Putin to lose this war on the Ukrainian battlefields and for his army to be crushed, the West must supply Ukraine with as many weapons as it needs to achieve such a victory for us;

– To crush Russia’s economy in this war, maximum Western sanctions are needed today and must remain in place until Russia admits its defeat and agrees not only to withdraw all of its troops from the occupied territories of Ukraine but also to pay the reparations needed to rebuild Ukraine;

– Russia must acknowledge today that Putin, along with Lukashenko, will be facing the Nuremberg Tribunal after the war, only this time it will take place in either Mariupol or Kharkiv;

What is needed to achieve such goals and such victories in ‘Our war’, together with Ukraine and the whole of the West, for lasting peace? A clear philosophy and a strategy.

Ukraine deserves respect from all of us. At least they deserve a silent apology. Because this war is also a consequence of the misguided philosophy, the West has been still following in its relations with Russia. The war is the consequence of the West’s indifference or naivety. And it is no longer sufficient that the West only admits that it has been wrong for a long time and that we, Central Europe and the Baltic States, were right to warn against Putin.

What is needed now? Those who have dominated the European Union’s relations with Putin’s Russia over the last decades, the West’s main ambition all along being ‘a dialogue with Putin’, those Western policy-makers of the West’s policy that has ended in a crash and the war, must sit down ‘on the bench’. They must sit down at least for one phase of this war. Germany, France, Austria and the South of Europe should realise that the United States, the United Kingdom, Central Europe and the Baltic States must take the lead in shaping a decisive Western policy towards Putin’s Russia. They should realise that it is very important to listen to the voice of Ukraine in shaping such a policy. This is the voice of the new European leaders. The new European leadership comes with new energy. The days of ‘business as usual’ in a jaded and complacent Western Europe are over.

War has been declared on democratic Europe. We will win this war because it is OUR war! But, to achieve that, we will have to put energy and leadership back into the list of European values.