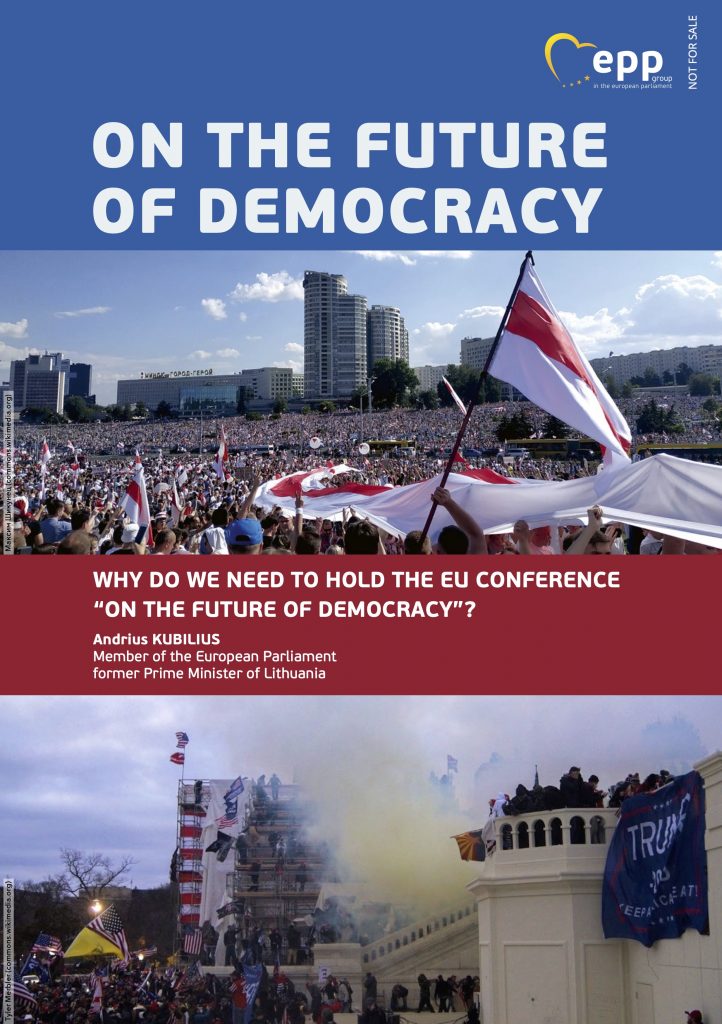 MEP Andrius Kubilius. Future of Democracy: It is time for the EU to assume leadership in the field of democracy

Download (pdf): Andrius Kubilius: On the Future of Democracy

Europe needs a consolidated and fully-fledged agenda to protect democracy, which is the foundation of our way of life

We can predict that with the new U.S, administration of President Joe Biden and his promise to initiate the Global Democracy Summit, the political topic of democracy values will become a priority for the transatlantic cooperation. The year 2021 will be a key year for the renewed promotion and defense of democracy values and it will be increasingly dictating our policy narratives also on the European continent. Democracy will be an equally significant priority topic as the fight against pandemic or recovery of the economy.

The EU was always at the front of promotion and defense of democracy values both on the European continent and globally. The dream Europe: whole, free and at peace can become a reality only if democracy becomes established all over the continent, from Lisbon to Vladivostok.

The time has come for the EU to have a broader and much more focused perspective on defending these values and to put in place a set of necessary European-level actions to move democracy agenda forward regionally and globally. It is time for the EU to reinvigorate its political leadership in this very important topic for our immediate future. Therefore, all major European political parties should unite behind an ambitious democracy agenda.

In the Baltics, we still have fresh memory and experience of a young democracy. We remember very well how much Western solidarity has helped us in the fight for our democracy 30 years ago. That is why we now want to share our solidarity in promoting and defending democracy not only in the Eastern Partnership countries (Ukraine, Belarus, etc.) but also in Russia or Hong Kong. On the other hand, we also have acquired our own experience on how to fight democracy erosion, as our countries are not immune to that. Based on all those lessons learned, I attempted to put a more comprehensive picture of challenges and opportunities for the future of democracy in the paper titled On the Future of Democracy (click to download).

In this paper, I attempt to describe two major areas in this topic: the areas of external and internal challenges to democracy. The first area concerns the external challenges that democracies are facing, which arise from authoritarian regimes in countries like Belarus, Russia, or China. The second area concerns two sets of internal challenges. The first set is linked to the erosion of democracies and populism at home (not only in Europe but also on the other side of the Atlantic). The second set is linked to a technological postindustrial change and it’s influence on a way our societies will function in not so distant future.

The paper describes all those challenges in an immediate and longer-term perspective: competition with authoritarian regimes and the necessity to defend democracy as well as the challenge of internal populism arising from so-called tectonic changes in our societies (new social and economic divisions coupled with drastic development of new technologies and the fundamental shift from an industrial to a much more individualized post-industrial society). The paper refers to the analysis of democratization by Samuel Huntington, who claims that waves of democratization repeat with an almost precise periodicity of 20 years. Taking into account that the third wave of democratization started in the 1980s and anchored Central Europe and the Baltic States back to democracy, and then exhausted itself around the year 2000 by leaving Belarus, Russia, and some other newly independent states falling back to authoritarian rule, the signs of the Fourth Wave of democratization should appear starting from 2020s.

The paper points out that now there is a window of opportunity for democracies to make sure democracy as a value will survive these challenges. It also puts forward ideas on new instruments (such as the International Convention of Democracies on Defence of Democracy or Global Magnitsky Act on Defence of Democracy) and processes (such as the Global Democracy Summit for Democracy proposed by President Biden) aimed at strengthening the democratic developments globally.

Starting European public discussions of the above-mentioned issues would be a major opportunity to show leadership in shaping the European policy of values.

A special EU Conference On the Future of Democracy would be an effective way to develop some concrete common EU ideas on the defense of democracy in the run-up to the Global Democracy Summit.

The EU Conference On the Future of Democracy could bring up European determined action to a global level and could be promoted there together with a determination of the new U.S. Administration to initiate the global Summit of Democracies already this year. This could also serve as a major axis of the EU cooperation with the U.S.

The future of democracy is an issue, which demands our permanent care and sustained efforts. This paper is one of such efforts.